Every year at Thanksgiving our dorms would be serving Magic Cookie Bars oh so frequently. I have no idea what went into them and why they were called Magic Cookie Bars. All I know is I loved them and would bring at least 6 pieces back to my room to munch on later (justifying to myself that I needed the energy just because I was studying so hard).  I still remember the November of 2001 when the first Harry Potter movie was about to be released and there was all this insane hype around it. I was working at the Student Programs Office at that time and was shocked to learn when one of my supervisors admitted she had never touched the book. Of course I made it a point to introduce her to those lovely books and let her borrow my copy. As a thank you for the wonderful introduction she baked me a whole box of Magic Cookie Bars and told me it was just so easy peasy it was nothing.
6 years later sitting in our little Studio we called Home I described these to my husband who had no idea what I was talking about and so I made it a point to introduce it to him. The entire batch was finished within 24 hours.
For the first few years that I made these Magical sensations I just used dried coconut because I couldn’t find the desiccated kind and they STILL turned out great. But over the years I’ve let go of any recipe and just made it in the order it needs to be layered. I call my version ‘Wicked Bars’ because they have a life of their own – so wicked, pulling you into itself, to keep coming back for more. It’s like the desserts of Pringles – once you pop you can’t stop.

This must be an East Coast thing though as I have come across many people in the Mid-West and West Coast who have never even heard of anything as bizarre as Magic Cookie Bars. If you haven’t then you must not deprive yourself from this wonderful indulgence which is so evil yet so satisfying.

Directions:
1. Layer a 9×13 dish or a pan with baking paper, this will make it easier for the bars to come out
2. Heat oven to 180 C
3. Crush the Digestives or Graham crackers in a food processor, empty out to the baking dish and add 2 tbsp butter at a time until it forms a firm base
4. Empty the can of condensed milk onto the biscuit base, spreading it all over and making sure it reaches all corners
5. Sprinkle a layer of chocolate chips, very generously
6. Sprinkle a layer of walnuts
7. Finally sprinkle a layer of coconut, very generously
8 Pop into oven and bake for 30-40mins or until the coconut has turned a lovely golden brown 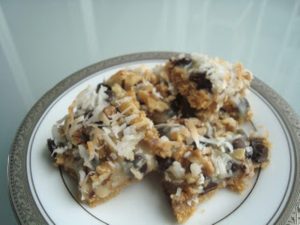 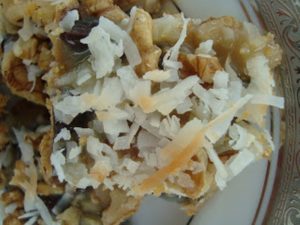 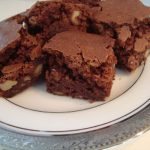