A few weeks ago I had posted my recipe for Carrot Cake. I’d made it for one of my bosses, who is a health freak, and loved it. But then our VP’s birthday was a few weeks after that so his brief to me was make a cake bigger than that, I don’t care how it tastes! THAT was a challenge, not the size (a bigger cake just means a bigger pan), but making something grand.  Well, the grand bit I added myself – I could have just kept it super simple and made ‘A’ cake in any large pan.
This turned into a project for me. I thought about it for weeks, you know if you’ve been following, I’ve been working on the salted caramel and then the chocolate caramel frosting.
The big boss was relocating, back home, and no longer going to be with us. Rumor had it he’d be leaving our team altogether. Most of us are in denial about it, I for one feel like I’ve been tricked. I only joined the team because of him, and now a few months into my new role and he’s off! Unacceptable!!!!
It’s seldom you come across people who genuinely touch your lives and have a big impact. You want to make sure they stay a regular and important part of your life. And just for that, as much as I felt I’ve been tricked I also felt I MUST honor him. Show him my appreciation for all that he has taught me in just a few months and for being such a wonderful person. I thought – I owe him one!
So here I was all set, to start making this cake 3 days in advance, starting off with the caramel sauce, the frosting and then finally the cake. All that went down the gutter when his plans changed and he decided not to come into office on the day the cake was actually planned for. We spent the day trying to figure out some way to get him into the office or just go as a team to celebrate at his place with the cake, nothing was working. Eventually at 6pm as I was getting my girls ready for their evening bath and bedtime I received a text letting me know:  emergency cake required NEXT DAY! Seriously? My only response to that was – thanks!
I hit the kitchen after dinner , by the time I was done with the cakes cooling and the chocolate frosting in the freezer it was 12 AM and I collapsed to go to sleep. I was so anxious about the frosting being all liquid, I ended getting up in 30mins to check on the frosting – put it in the fridge, put an alarm on for 5:30am and finally went to bed.
It took a whole hour to put this cake together in the wee hours of the morning. But I have to say, it looked gorgeous when done and must have weighed at least 5kgs (11 pounds)!!!
The cake was described as EPIC 🙂 That’s the best compliment I have received ever for any of my cakes. And now that the benchmark is high, it seems next to impossible to be able to beat this. So after 4 hours of laboring over a cake, I can proudly say it was so worth it.
Ingredients
2 2/3 cup oil
3 cup sugar
1 cup brown sugar
2/3 cup cocoa
1 cup milk
2 tsp vanilla essence
6 eggs
3 cup flour
4 tsp baking powder
2 tsp baking soda
8 tbsp water 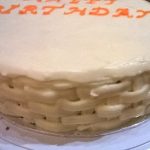 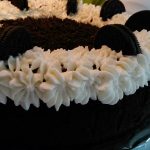