I’ve been doing all the birthday cakes for my team ever since I joined. It’s sort of become my thing and at some level I think people expect it as well. I enjoy it, it gives me something to experiment on, a new challenge and then I get to share it with all of you.
My parents were visiting for a few weeks, one of my team mates was re-locating to Rotterdam and in the midst of all this both my daughters were sick with some virus which they obviously passed down to me. With all this going on I wasn’t able to bake for one of the birthdays which I felt horrible about. So I took a rain check and promised to find a way to make up and make it more personal.
So this birthday boy is a Bread & Butter Pudding fan. The last one I made was literally wiped clean by him and there was no trace of shame either 🙂 So the story is, he’s grown up having Bread & Butter Pudding every Sunday without fail. It was their Sunday tradition, his mom would prepare the pudding for the family which he would finish. He’s been away from home for  few years now so there’s not much of bread and butter pudding that he’s been having.
I thought I’d make him a new variation of Bread & Butter Pudding,  Chocolate Bread & Butter Pudding. I’d been meaning to try it out and what better way to give away to a Pudding lover.
The recipe doesn’t change besides 2 steps, and one additional ingredient – chocolate of course.  I made the mistake of applying butter on the slices of bread instead of adding it to the custard. The result was not all areas of the bread became a chocolate brown, the butter acted as a seal and the bread wasn’t able to absorb the colour. It tasted just fine, I would have liked it to be Chocolate all over instead of certain areas of the bread.
Ingredients
9 pieces of white bread (as old as possible – it soaks the custard better)
Butter – for greasing and spreading on bread
284ml Elmlea double cream
200 ml milk
3 eggs
1/2 tsp vanilla
1/2 C sugar
150g dark chocolate (you can chose to use milk if you prefer) cut into small pieces
Directions: 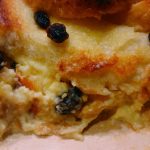 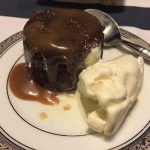