Macaroons – Ah! How the French have improved our lives by introducing these little pieces of delight. Except I don’t know how to make them to save my life! I haven’t tried, but it just looks so intimidating I haven’t bothered entering that territory.
What I have tried, are Coconut Macaroons 🙂 It was only until very recently ( a few years ago) that I tasted the real Coconut Macaroons. I grew up having Coconut Macaroons from the neighborhood bakery, they were pink in colour, sweet and hard as a rock! As a kid the only thing I can recall that was delicious about it was the sugar dose. Beyond that, I didn’t go close to those things. Disaster! As an adult, now I think, Gross!!!
It was such a pleasure to wipe those rock pink macaroon memories from my mind as I baked these little babies. These are crisp on the outside, chewy on the inside. The coconut provides the texture and it’s important to use sweetened coconut and not desiccated. I’ve made Macaroons with desiccated Coconut as well, and it didn’t work out.
I wanted to add a touch of chocolate, so I dipped half the macaroons in melted chocolate and let it set. This way you don’t need to make separate batches for Chocolate Coconut Macaroons and Coconut Macaroons and you get to enjoy both in two bites.
Ingredients
1 packet of sweetened coconut ( 395g)
1 can condensed milk
1 tsp vanilla
1/4 C flour
2 egg whites
pinch of salt
75g Chocolate
Directions 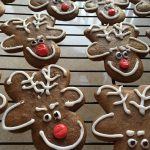