I’ve had dried figs lying in my fridge for a while. I won’t disclose how long, but let’s just say a very very long time, and NO they did not expire. There was just too much of it and no one was eating it and it was taking up unnecessary fridge space.
The easiest thing I could think of making was Fig Jam, but we’re not a very Jam kind of family. I mean I loved Jam as a kid and still LOVE Jam, but I suppose trying to cut down on sugar where I can and start the day healthy has made me look to other things. So Jam wasn’t an option.  Plus I wanted to do a trial run with just a small amount of Figs and see how that turned out before I started making big batches of things I wouldn’t be able to discard.

So I settled for Walnut Fig Bread, not your ordinary Bread, but I thought it might be worthwhile trying out. And at the time I was getting this ready I could only think of a nice layer of butter on a crunchy, crumbly bread and I was hoping that’s how it would turn out.

Lucky for me, this Bread turned out so well I made it twice over the weekend. The first was a trial, I was going over to a college get together and it was an afternoon tea pot luck, I wanted to take something sweet savoury so I thought this would be a good filler. The bread turned out so well I made it the very next day for team mate at work for her birthday and we had it over coffee for breakfast. Just goes to show its diversity, afternoon tea, or breakfast – anytime is a good time to eat this.

It’s nice and brown on the outside giving it a nice crunch to every bite and crumbly on the inside giving it texture. Try it, you won’t regret it. 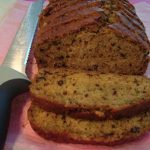