Has anyone tried the Peanut Butter stack at Starbucks? The average person will probably say ‘no’. It’s easy to miss; it’s usually sitting very quietly keeping to itself on the last shelf of their dessert section. One needs to bend down to have a good look at it and most people would not make that effort for a dessert at Starbucks I think. My husband and I tried it a few weeks back and we fell in love with it. It’s rich, sweet, drowning in calories and everything it shouldn’t be going into to your body! But it’s lovely to treat yourself to this once in a while. I would always recommend sharing a piece with one other person, hogging one on your own is just going to make you feel sick in your last few bites. Plus when you share it, you’re left with the feeling of wanting more 🙂
So as I bake every weekend I asked my husband mid-week what I should prepare the following weekend, and the obvious request was for Peanut Butter stacks. It became a little project of mine and there was no chance I was going to make it the coming weekend, there was too much research involved. So we made a couple of trips to Starbucks without purchasing the dessert and just stood there and debated on the layers that went into this little sugar tower. It’s a task I tell you, with the number of layers that go into this thing. But I have to say as it starts coming together it gets very exciting.
Below is my version of the Peanut Butter stack and if I do say so myself, it comes very close to Starbucks!
Ingredients:
Fudge Brownie
1/2 cup crunchy peanut butter
1 cup icing sugar
1/2 cup butter
Caramel Sauce for drizzling
Handful of chocolate bits and peanuts for topping
Directions: 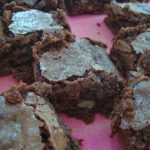 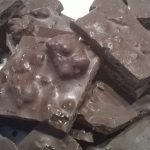