Now that I’m done with the Peppa Pig, a Frozen cake as daunting as it sounds did seem like a challenge I could take on.  When Frozen was released late 2013 my girls were TOO young to enjoy it (then 2 years and the younger one just 5 months). Now at 5 years and 3.5 years they are all about Elsa and Anna and freezing everyone and everything around them. I have to admit I never thought I’d be doing a Frozen themed birthday party, not because I was against it, I was dying to do one, but I didn’t think the fever was going to last this long. But 3 years later, still going strong.

So my next few entries are going to be Frozen related but I’ll start with the most exciting one for now – the CAKE!

I’ve always felt poor Anna gets no attention from the little girls. Everyone wants to be Elsa and it’s all about her, when in reality the movie is really all about Anna, Elsa just plays the special role of icy powers and that’s it. So, I thought let me do my bit and make an Elsa Anna cake instead of just Elsa.

I didn’t have the dolls that have the top halves as plastic so I had to be super careful to make sure their dresses don’t get ruined with the frosting and in the pictures you might see some random cling wrap coming through somewhere.  First and most importantly, don’t get intimidated! if you’ve seen the past birthday cakes I’ve made of Dora and Little Miss Birthday, this was actually the easiest cake to decorate. I had my challenges on getting it together a bit, but it worked out fine in the end.

You’ll need a Wilton Doll Pan and an 11″ round pan to make the platform for the cake.  use your favourite vanilla or chocolate cake recipe and bake one doll cake and one round 11″ cake. 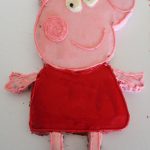 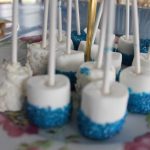